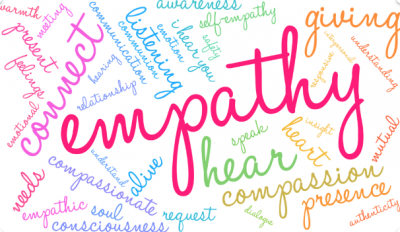 A few people asked me to elaborate on a post I made on Facebook yesterday regarding empathy. I thought I would do that here. This was my original post:

“Deep feeling and empathetic Christians (just like I am) need to be extra careful that what we believe is congruent with God’s Word. Our hearts and empathy for others will lead us astray, otherwise.“

How could empathy possibly lead us astray, especially if we see Jesus as having this same character trait?

Let me explain with a personal example from my own life:

When I was in my mid-20’s, I went back to church for the first time in several years. I only went to this new church so my mom would stop asking me to go. I surprisingly ended up liking it there. I liked the pastor, and there were many people my age. I felt like I fit in.

A few months later, though, I found myself getting very offended with the pastor. He started talking about things that really hurt and angered me. I don’t remember how he worded it, (although I’m sure it was in a loving way, coming from him) but one time he referenced that God did not intend two people of the same sex to be together.

I didn’t know who I was more angry with – him or God. I felt betrayed by both of them. I had been in a relationship with another woman a few years earlier, and I knew others who had been as well. These were people who were very close to me.

Who was he to say such a thing? These were some of the kindest and most loving people I knew. I felt personally attacked by his words and also defensive of my friends.

I was so surprised that he was saying these things, because some of the first few traits I noticed about him was that he was such a kind, compassionate, and empathetic pastor. He cared about everyone.

Knowing me back then, I’m surprised I even went back to church after that – but I did. I was very disappointed and hurt. As the months went by, he would say other things about other subjects that would hurt me and make me very angry. I was constantly being offended, although I never told him that.

What I didn’t realize, was he was challenging my beliefs and parts of my life that I held dear. This was so confusing to me, because he was such a kind man.

My beliefs about what was good, loving, and the right thing to do were being continually challenged concerning many different subjects.

This made me start questioning what I believed. I didn’t believe that God felt the same way he did. At least I hoped he didn’t.

Months later I opened my bible that I had kept all of those years from my first communion, and I started reading it. I suddenly had the revelation that there was so much more to Jesus – so much more to Christianity than I had realized before. My eyes were opened to the realization that going to church was much more than doing the right thing, being kind to others, and making sure that I was being a good person.

My eyes suddenly opened to realize that God was much bigger than I thought He was, and He loved me. This is when I gave my life and my heart to Him. I grew up in church but never actually gave my life to Him until this point.

I felt an excitement to get to know Him better, and such comfort in knowing He had a plan for my life. I wanted to follow after Him the best I could.

I continued to be challenged by what I heard at church, but now I was looking in the Bible to see what God had to say about it. I was beginning to realize that my pastor was still the same kind, caring, empathy-filled pastor that I originally thought he was.

He would take that empathy and compassion and love others by listening to them (as he often listened to me when I went in to talk with him) but he always lined up his empathy with God’s Word.

I was continually put in this new place of measuring what I believed up to what God said in the Bible. It was not always fun, because I started to realize that much of the beliefs I had all of my life were not actually biblical. They were what felt right to me, but that didn’t mean what I believed was biblical.

Those things that once offended me I now see differently. That doesn’t mean I don’t care about people, have empathy, or love them, and it doesn’t mean I forget what it’s like.

I am so glad I started learning how to do this back then, because I now see that it started training me for the ministry I have now.

To be honest, (and this is the point of my post) there have been times over the years that the empathy I have felt has taken me places to where I start to get confused about what God’s Word actually says.

When I haven’t measured how I was feeling up to His Word, I became confused and disillusioned. This is not a good place to be.

When empathy does not lead us to the Truth, we can be led astray.

When God was healing my heart concerning my sexuality years ago, He gently showed me that I was idolizing women and putting them in a place higher than Him. He was right.

He started showing me that to truly love a woman meant that I would choose to see her through His eyes, not my own.

He also showed me that to truly care for another woman’s heart, I would need to lead her to Him, not away from Him or to myself.

When I empathize with other women in situations like this now, I care for their hearts by listening, caring, and pointing them to Jesus, the only one who can satisfy the deep longings of their hearts.

As someone who feels everything deeply, this would have looked very different if I wouldn’t have learned the extreme importance of letting empathy draw me (and others) to Jesus, rather than letting it draw me to my own heart’s natural emotional response, which can sometimes not at all line up with God.

I know this was a long post, but I hope it explains why it is so important for those of us (and anyone, really!) who are compassionate, deep feeling and empathetic people to measure what we believe and do against God’s Word. Our hearts can lead us (and others) astray, otherwise.

There are so many things that can seem good, kind, loving, and compassionate that are not at all in congruence with God and who He is. This is why I always need to make sure my heart is in line with His.

My increasing concern right now and reason for writing about empathy, is that I see this increasing around me. There can be beliefs that seem good and what a loving God would surely line up with. Not all of these things line up with Him, though. They have an appearance of godliness but are not of Him at all. It is extremely important to know the difference.

Does this make Him cruel and uncaring as I once thought? No, not at all.

I have found Him to be the one who cares for me and my heart more than anyone. He knows that sometimes what seems right to us -what feels like life-is actually leading us to death.

For the Christians reading this, I challenge you to measure your beliefs (as I continually need to do) up with what God says. Not what feels right, not what our hearts tell us, but what He says. This applies to all subjects, not just the one I talked about from my own life.

It can feel offensive at first. As I said earlier, for me it did; but now I have a new understanding and see His great love for all of us in ways I didn’t previously understand.

True empathy leads us to Jesus.

Jesus loves us so compassionately and with an empathetic heart by drawing us in closer to Him and leading us away from anything that threatens to take His place and what is unknowingly leading us to death.

This is the purest form of love there is.