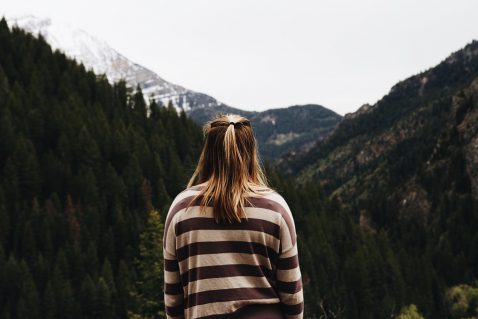 I received an email from a woman who suddenly started having intrusive thoughts telling her she is a lesbian. She wondered where those thoughts came from and was confused by it all. This is not an isolated email. I have received other emails in the past from people who are suddenly bombarded with thoughts like this that seemingly come out of nowhere. This is an excerpt from one of them:

“…She told my friend a lie that I was gay. At first I just shrugged it off. I didn’t give it thought. But then my friend came to me and stated that another woman in her church was saying the same thing about me. Instead of casting down that thought, I began to ponder and wonder how could they say these things about me and began to ponder about this out of fear that people even thought to see that in me. As I dwelled on these thoughts out of fear, I became afraid of being around women and my desires began to change. Here I am a few months later literally struggling to get out of bed. I’ve had to continue to resist lust with women since then, even though it was never  a problem prior to this…”

We have an enemy who is very real. When people start having thoughts like this out of nowhere, I believe it is coming from the enemy of their souls who wants nothing more than to kill, steal, and destroy them.

When these thoughts go unchallenged, they will grow quickly.

The thief comes only to steal and kill and destroy; I have come that they may have life, and have it to the full. (John 10:10)

I might have trouble believing how easily this can happen to people (and how real it can be) if the same thing had not happened to me many years back.

When I was barely 18 years old, I started having random thoughts about a very good friend of mine. These thoughts were of a sexual nature, and I had never had thoughts like that about another girl before; so I was quite surprised when I started having them.

It all began with dreams I started having about her out of the blue, and I couldn’t figure out why. It didn’t match how I felt about her in real life at all. I had no idea what to do with these thoughts. I felt embarrassed and knew I could never tell anyone.

(Little did I know, the same thing was happening to her toward me.)

Put on the full armor of God, so that you will be able to stand firm against the schemes of the devil (Ephesians 6:11).

No one ever taught me back then that I had an enemy who could lie to me.

Consequently, I dwelled on these thoughts for months. Dwelling on these thoughts long enough eventually changed how I felt about her. My feelings for her started to change. I later told her what was going on, only to discover she was feeling the same way. Neither of us had ever had this happen before, only being attracted to boys prior to this.

We eventually entered into a sexual relationship with each other, only deepening and cementing those thoughts and emotions I was having.

She became my everything.

Satan loves to attack our identity. (This goes for all attacks against our identity, not just ones regarding our sexuality.) I did not know I was taking bait the enemy draped in front of me. I did not realize I was in a spiritual battle my eyes could not see.

For though we walk in the flesh, we are not waging war according to the flesh. For the weapons of our warfare are not of the flesh but have divine power to destroy strongholds (2 Corinthians 10:3-4).

For years, I never fought against those lies that the enemy threw at me as truth. By then, I had dwelled on those thoughts so much that they felt so much a part of me. Thoughts of being a lesbian felt as real as my own name. I didn’t start to fight against them until 16 years later.

My thoughts took me places I never thought I’d go.

One day I finally woke up to realize I had to do something. Years had gone by since being involved with another woman, but I had let these thoughts go on for so long without fighting against them that I let it draw me into pornography. The enemy no longer needed to dangle thoughts in front of me. I was making choices on my own that were adding to the trouble I was in.

What thoughts have been going through your mind, and you have wondered where they came from?

What thoughts are you tortured with?

It took a lot of fighting (along side of Jesus) to get here, (click here to see my journey) but when you embrace something for so many years it can feel like a very real part of you. I had to learn how to put my focus on Jesus, and who I am in Him (not who I don’t want to be). He has transformed me and healed so many places in my heart.

It was a pretty big battle at times, but I know I have victory in Christ. I am still tempted from time to time, but the power those temptations hold are so much less now.

Did you ever think about how the enemy knows our weak spots? He is not omniscient, like God, but he has observed each of us for a very long time. He knows what causes us to get angry, what usually hurts us and what tempts us.

I used to become upset and impatient with myself when I was tempted, wondering when I would finally be healed and able to move on without having to deal with it anymore. I took these temptations to be a sign of me still not being set free. I would put the blame on myself.

When we fall into self-condemnation, along with shame and guilt, it is much more difficult to fight temptation.

When we are set free from strongholds, the enemy will come back to tempt us. He knows what was once a weak spot. When you are tempted, Jesus does not look at you in disgust. He is cheering you on, knowing He has given you the tools to fight against the enemy.

I cannot stop temptations from coming my way, but I can choose to not embrace them as part of who God made me to be. I can choose to say “no” and cling to Jesus, instead.

We cannot stop the enemy from throwing lies at us, but we can learn how to reject those lies and not condemn ourselves when they come.

Think of it this way: The next time you are tempted (in any way), imagine Jesus smiling and saying, “You can do this!”. Regardless of what your temptation is, reject the lie for what it is, replace it with God’s truth of who you are in Him and move on. Jesus will be cheering you on!

Father God, I pray that You reveal the truth to each one of us about who You created us to be. If we are believing any lies spoken to us by the enemy, I pray that You expose them right now. Expose the lies and show us the truth of who You say we are, instead. Help us to reject those lies and embrace the truth about who You made us to be. Thank You for loving us and never giving up on us. You are the Restorer. You are our Restorer. In Jesus’ name I pray, Amen.